Remembrances of the Tidd Family

I am writing a history of the Tidd family, for Zella, at her request. I hope my children will find it interesting, also, so I am making copies for them.
Daniel Tidd, our grandfather, was born at Holliston, Massachusetts, July 11, 1825. His family had been in this country for at least one hundred years before that – perhaps longer than that. They had come from England by way of Holland, and there is a tradition in the family that there was an Irish ancestor, named Sir Daniel Tidd, somewhere along the line. At any rate there was a Daniel Tidd in each generation. Our grandfather’s father was Daniel Tidd, and back as far as we know, there is a Daniel in the family. When Earl and I visited Holliston, which is a small village, we found many graves of the Tidd family in the cemetery adjacent to the Congregational Church building. This was the church to which our grandmother Tidd belonged. One grave was that of a Daniel Tidd, who was a soldier in the Revolutionary War. It was marked by the emblem, which is placed on the graves of all veterans of the Revolution.
Read more »
Posted by gophergenealogy at 1:53 PM No comments:

I posted a new page on gophergenealogy@blogger.com. Due to our busy couple of weeks with family I am posting articles previously written for other publications. Look for the "Revolutionary War Patriots of the Amos Tidd Family" at the top of the blog under that page.
Posted by gophergenealogy at 1:07 AM No comments:

The Moehnke Family Moves to the New World


Gottfried and Anna Dorothea (Malnososki or Mollofskie) Moehnke came to the Sullivan area of Grey County, Ontario, Canada, with their family to find a better life in April 1858. Family records list several towns where they lived in Freidrichstein, Prussia, now in Warmian-Masurian Voivodeship (Province), Poland. They are all within a short distance of each other and east of Hamburg. They sailed from Hamburg and the passenger record includes the following people: Gottfried age 46, Dorothea, wife, age 45, Carl (Charles) age 17, Michael age 14, Justine age 12, Gottfried age 9, Christine age 7, Frederich age 5, Florentine age 2, and Christian 4 months. The place of origin is Friedrichstein, Prussia and his occupation is Landmann (probably farmer).1 The baptismal record of Justine, created at her baptism on June 3, 1872 in the Evangelical Lutheran Church by Pastor Zu Brank, while they were living in Sullivan, also confirms this information.2
Read more »
Posted by gophergenealogy at 1:02 AM 9 comments: 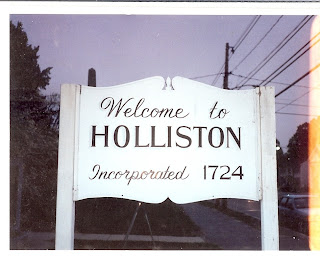 This week I have been working with findagrave.com for my Tidd family in Holliston, Massachusetts. They were posted with some pictures, with limited and some inaccurate information. By contacting the creator of the postings, the same person for each of the four entries, we were able to update the information on burials that occurred from 1806 to the 1850s. When he created the postings he was using the cemetery burial information, of which there are various versions. I have researched this family for over forty years and have the vital records information plus family recorded information. This process also caused me to verify some of the facts and update my database. We even added the wife of the Revolutionary War veteran Daniel Tidd. The best result of this process was the inclusion of my contact information for those researching this family.

Read more »
Posted by gophergenealogy at 10:50 PM No comments:

This is an article that was published in the Bulletin, a quarterly of the Genealogical Forum of Oregon, in December of 2011. August is proving to be a busy month, so I am posting articles written for other venues.

For this article we are focusing on researching by location. As an example the review covers the Massachusetts state records, Middlesex county records and the records for the town of Holliston. One of the best resources for doing a place search for such records is the catalog at familysearch.org. You will usually first search by the town, then the county and finally by the state. A useful tool when doing such a search is to print or save to your computer the index of topics found for that locality, and then make notes as to what is available, noting ones you wish to pursue.

Read more »
Posted by gophergenealogy at 6:50 PM No comments:

My Most Utilized Websites Found in Top 500 and Then Some

This week I received an email about the Top Seventeen Most-Visited Websites. The link took me to the following website.

Most Popular Sites 2012: Alexa Ranks The 500 Most-Visited Websites
http://www.alexa.com/topsites
From this information I created a list of the top twenty websites that I frequently visit or receive information from.

Read more »
Posted by gophergenealogy at 12:34 AM No comments:

As I pondered what story to share this week, I remembered a unique story about the family of Willard Mortimer and Abigail Stedman (Tidd) Darling. She was the youngest sister of my ancestor Daniel Tidd Jr. In the process of researching I encountered a family member who was also working on this family. Satia Turner Goff from Seattle, Washington was my first family connection and I don't even remember how we met. First of all I just loved her unusual name and second I was thrilled to find someone who had family memorabilia that she was willing to share. We shared numerous emails, mailed each other copies of our materials and pictures, but never met personally. She was the great, great granddaughter of Abigail. Unfortunately she had health problems and passed away in 2007. I was sorely disappointed not to have more time to share with her. From my database I have these notes from her:

Read more »
Posted by gophergenealogy at 10:24 AM No comments:

How a Genealogy Conference Happens

Last weekend the Genealogical Council of Oregon held their bi-annual conference in Eugene, Oregon. The two key coordinators for the conference were Connie Lenzen, Conference Chair and Beverly Rice, Program Coordinator. Connie made the arrangements with the facility and kept track of progress in all areas of conference preparations. The conference was held for the third time at Lane Community College, Center for Meeting and Learning. It is a lovely venue and they included a nice lunch as part of the package. They provided site maps and a layout map for the vendor area.

Read more »
Posted by gophergenealogy at 12:36 AM No comments: