An Artifact Leaves Our Home

Our oldest son Daniel recently relocated and moved into his own apartment. At the age of thirty-two this is his first time to live on his own other than a two year mission to Pennsylvania. Our three daughters all lived on their own for a while prior to marriage. We still have two sons at home, the middle son having served a mission in Hawaii and receiving an AA in Computer Science; the youngest attending community college. This has worked well for us, as they help with household expenses, all working to support themselves. Having older children live at home is not really accepted in today's society, but it happens quite frequently. After working on the 1940 Census, in a time period of great financial struggles, many older children lived with their parents and/or siblings; I feel that we are not so unusual. A great many of them were not married.

When Daniel moved last weekend he took only minimal furnishings and basic supplies. It was a quick move, having found his apartment just a few days before the new job was to start. He has more interest in our collection of family artifacts and will probably be the keeper of most of them, so I was not surprised when he told me he was taking my great grandmother Julia Brown Olsen's bread kneading table. A few years ago my great uncle Ben Davis and his wife Anne, the youngest daughter of Julia, gave us the table as they were moving to a senior center.  The table sat along side his washing machine in the garage, holding laundry supplies. We cleaned it up and put it in our basement for the children to play games on.

Not long ago when Daniel rearranged his room the table moved in there and he became rather attached to it. As you can see by the picture it is very simple in nature, but it serves his needs. The boys took this picture after the move, so it is the best that I have for now. I said he could only take it if they took a picture of it for me. You can see that is sits fairly high, with a flat metal enameled top, and a small drawer in front with a metal knob handle. The bottom is wood painted green. It is actually in quite good condition after all it has been through. Not fancy, but I can imagine Julia and her daughters laboring over it to knead the bread dough on a daily basis. With seven children I am sure they ate bread as a staple and probably made a variety of other baked goods. Whether it was officially designed for this purpose I don't know. 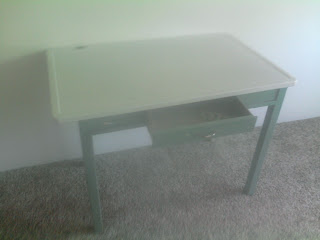 Searching online I did not come up with anything about this type of table, but it does seem reasonable that making and kneading bread is what is was used for. Over the years I have visited two of the homes that Julia and her family lived in. The one in Sherwood, Oregon is of medium size and had a rather small kitchen. My father's cousin Mariruth shares, "we used to play in the kitchen, where there were two large flour bins behind the lower doors. I could crawl in behind them and use them as a hiding place."

Julia's kitchen held a kitchen sink, a stove and an icebox. Many of her kitchen gadgets now reside in our home in our second kitchen. Daniel has also expressed an interest in these. It was thrilling to walk through their home, entering from the front door, passing through the parlor/living room/dining room, two bedrooms on the left, and another on the left that was added when the home was used as a birthing home. At the back of the home is the kitchen, from which she could see part of the yard, and then down a narrow flight of stairs to the basement. In the basement she stored her preserved food and other household items. When I was in the home it is was being used as a gift shop.

My serendipity moment is a walk back into time and the place where my great grandparents lived from about 1921 to 1935. I imagine her laboring over the kneading table to produce wonderful baked goods for her family to enjoy. Her mother, who lived with them, passed away in March of 1928 and Julia's husband John passed away in October 1928. At that time most of her children were married and living in their own homes. When they first came to Sherwood they also bought a large commercial building on the same street and the boys had an apartment upstairs, but I am sure they came home for their mother's wonderful home-cooked meals.


In 1929 Aunt Anne married her first husband and I can imagine her mother Julia sharing some of her own kitchen items with her young daughter. Much like her, when Daniel moved out we sent with him a portion of our kitchen items. Today I went out and bought new silverware, as the old set of which we had lost many pieces went with him. We no longer need all that we have gathered over the years. Eventually the family artifacts are going to be split up among our six children. Before that happens I need to catalog and document what I know of those artifacts.


How are you dividing up your family keepsakes? Have you taken time to document them as part of your family history? Today is a very good day to start that process. Watching Dear Myrtle, in her short videos, recording for future generations her knowledge of her family artifacts is motivating me to begin that process now while I can still remember. So, lets get started.
Posted by gophergenealogy at 3:45 AM