Steps in Planning a Funeral

Following along last week's post on the passing of a loved one, this week the post is about the steps in planning a funeral. With recent experience in being involved in organizing a celebration of the life of my wonderful mother, it felt so important to honor her life and share the highlights of it with those who would be attending.

The day of her passing, after spending hours at the hospital just coming to grips as a family, we began to accept the finality of her life. The hospital staff was very compassionate and allowed us to have a conference room for this very special time. They provided snacks and drinks, but once the affairs were in order we decided we needed to have lunch.

Lunch time allowed us to come together as a family in a restaurant that was one of her favorites. After lunch we went to her home and time passed until we needed to go to the funeral home to make the arrangements for her burial. Some pre-arrangements were made years ago when our father died in 1988. Since she remarried we were working with our step-father to decide on burial issues and the funeral. Gratefully financial costs were not an issue.

After making the burial decisions, which is very hard in such a situation, we focused on the funeral. We decided to keep it simple by using the chapel and facilities at the funeral home. This meant those attending could attend all the activities in one place. There was a separate viewing room in a very private setting, a chapel for the service that would accomodate the number of expected people and a room for hosting a catered luncheon following the service. The building has a lot of natural lighting and was well air-conditioned for the hot summer weather.

The key to the service was her favorite colors purple and lavender. We agreed upon the funeral service and included opening and closing prayers, two speakers, two songs with other recorded music, a video tribute of her life and a time for immediate family sharing of their memories of her life. The first speaker was our uncle, her older brother. He shared the stories of her early life. Then the second speaker was my husband who shared stories of her later life. The first song was "There is a Season" and the second was a musical medley.

Leaving the funeral home, we went out to have a late dinner. We ended a very stressful day on a note of companionship, the four siblings, our spouses and our step-father. The next day we once again returned to the funeral home in the evening to finalize the details. We delivered the chosen outfit for her to wear for the service. During this time we choose an officiator for the service, her local LDS bishop, and the honorary pallbearers - her sons, son in laws and grandsons. A lovely poem was chosen for the funeral program with a rainbow below, representing a saying on our father's headstone, "Look for the Rainbow." On her marker it will say, "I found my Rainbow."

We choose a lovely spray of flowers for the casket and another one standing by the podium. It included a large variety of flowers, mostly purple, which she would love. With ribbons indicating these were from her family, they stood near a large picture of her prepared from the same picture on the program cover.

The biggest challenges were writing an obituary and creating the video tribute. Thankfully the year before one of my blog posts was a tribute entitled, "My Memories of my Mother." She reviewed the post, giving me a few corrections, and then suggested that it could someday be used for her obituary. After changing the title to, "Memories of our Mother" it was included as an insert to the program. The short obituary for the newspaper was a bit easier to compose because of this post. The online information about writing obituaries and reading through some current ones in the newspaper made this easier to accomplish.

The blog post and her picture were also shared on the guest book of the memorial home and can be found at lincolnmemorialpk.com. If you visit the website you will find comments shared by family and friends and the entire collection of pictures that tell the story of her life. The pictures were shown as the video presentation. It took many hours and many people contributing to create this collection, which we will continue to treasure.

Once we had the pictures selected, we were able to provide the collection to the funeral home on a flash drive. They then posted it and allowed us to have access to organize the placement of each and identify each one. The one key that made this easier is that our family picture collection was scanned years ago and we could look through those files to select the best of them. My oldest daughter and her boyfriend created a wonderful collage with many of these pictures and it was displayed that day. It is 33"x24" and now resides in my office.

By the day of the funeral Saturday July 6, just one week after her passing, we felt at peace with the process. The funeral directors were wonderful in assisting and ensuring that things went well. The chapel was pretty much at capacity with her loved ones, family and friends. It was delightful to visit with so many people who were a part of her life. The catered lunch was great and there were only some minimal leftovers. Several beautiful bouquets and plants arrived and after the service these went to the homes of family members. Her final interment (she was cremated) will not be until September, her birthday month, as family from New York will be visiting then. We will then gather again as her family and celebrate her life another time.

No funeral is easy to plan, but overall we felt this was a great success. Pre-planning is wonderful, but in reality few people have done this. It is an honor to be her daughter, who for the last sixty years had the blessing of her sweet kind influence in my life. Not every family is blessed to be able to work together cooperatively in planning a funeral and celebration of our loved ones life. We are all extremely grateful that she formed the basis for the close family ties that continue to support us in our mourning. 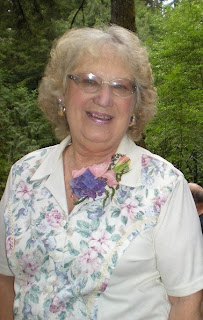